Good afternoon everyone!
I propose to your court a review of another DIY kit from China, this time we will assemble unusual clocks on RGB LEDs, according to the description, this is an emulation of clocks on indicator lamps.

Already by tradition, the watch arrived in packages and in the complete absence of instructions, it’s good at least you can download it on the site.

The main and only fee to be collected.

In general, the quality of the board is good, the mask is applied everywhere, but either I’m not so neat, or it’s a property of the matte mask, in a word, in some places the mask peeled off during the soldering process.

124 RGB LEDs are the main pain of this set. Installing all the LEDs was another challenge.

Package with fasteners for body assembly.

Some 2T1 transistors, a couple of electrolytes.

I start the assembly by installing all the LEDs.

The process is very soothing, first solder, then ring, then find where you hung the snot or did not reach the leg and start over. Most of the hemorrhoids were delivered by one light for which the green color did not work, at first I picked it for a long time trying to figure out where I didn’t solder or shorted it out, then I decided to remove it completely and it turned out that the green one didn’t work there from the word at all, but there was a supply of several pieces so everything is ok. Of course it could
check all LEDs before installation, but then I would probably still assemble this set.

After you have dealt with the front side, you need to proceed to the reverse side of the board.
Here, the only difficult thing is the installation of a microcontroller, but more or less I did it.

In my opinion, the most finicky in such sets is the touch buttons, leave a little flux and nothing will work normally. So after I installed everything on the board except the beeper and the microphone module, I went to wash it, with feeling, really with the arrangement.

Then I installed a beeper with a microphone on the washed board and decided to check the clock in test mode as written in the instructions. I got this picture. Three lines in green did not work from the word at all, and one more in blue and red.

I had to take a needle, a https://jiji.ng/osogbo microscope and see what I did with the legs of the controller. As it turned out, everything was just the controller’s legs hanging in the air.
During the call, I could not find for a long time where the lines from the LEDs went, I already thought that there was something unusual there, but it turned out to be easier. The resistors around the controller are each responsible for their own color in their line, but their wiring is very inconvenient. I understand this was done as a compromise between beauty and functionality, but you have to call the resistor from both sides and only then look for it on the controller. Only with the lower backlight everything is simple and clear, there external contacts go to diodes, internal to
controller, except that the sequence of resistors is out of order.

After all the LEDs during the test began to glow, it was time to assemble the case. And here, too, without half a liter you can’t immediately figure it out.
This is how the sequence of the location of all the parts of the body looks like.

First of all, the lower part of the case is assembled, with hexagon screws, then the screw heads serve as watch legs and prevent the microphone from resting on the table.

From the side of the board, nuts are screwed onto these screws that hold the board and act as limiters and supports for the upper part of the case. I forgot to say, when assembling, the photoresistor should not be installed flush with the board, but should be pushed out on legs so that it would be flush with the future case. otherwise, switching to night mode will not work.

It looks nice, but who was the genius who clamped another piece of acrylic and decided that nuts as a spacer was a good idea. Now, puzzle over how to close this slot in the case, and this is not just my grumbling, LEDs shine through it during operation.

Now we put the upper black plate on top of the racks and you can
install plates with numbers. But first they need to be cleaned of the protective film. By the way, when I looked at the store page, I thought that the numbers in the plates were engraved, but it turned out that they were cut through, so when removing the protection, you need to be careful not to accidentally break the insides on the numbers 4,6,8,9

And finally the fully assembled watch. By the way, they didn’t put beautiful screws with a hexagon head for the upper part of the case, they decided to get by with the usual ones under the cross, but it would be more beautiful.

When the doctor was turned on via USB, the current consumption was 25 mA. Taking into account the fact that the whole circuit is powered by a 3.3 volt converter, the clock works normally from any lithium battery, until the voltage on the battery has dipped below 3.6V, you can even not set a booster. But further without a boost, in any way, when the supply voltage drops below 3.5V, my glitches and reboots begin.

A few words about the functionality and use
This is what the working hours look like. You can clearly see the same gap in the case that I spoke about above. And it was also worth installing plates with numbers with gloves on so that they would be less slapped, then the glow on the surface of the plate would be less.

It may not be so visible in the photo, but in general the readability of the characters is normal, even looking at the clock out of the corner of your eye you can understand what time it is. But the viewing angles, unfortunately, suffer, if you look at an angle of more than 30 degrees, then the characters after 4-5 become bad
distinguishable, of course, this can be attributed to the fact that in minutes these figures are of little significance and this will be partly true, but there are still hours, in a word, the viewing angle is small. 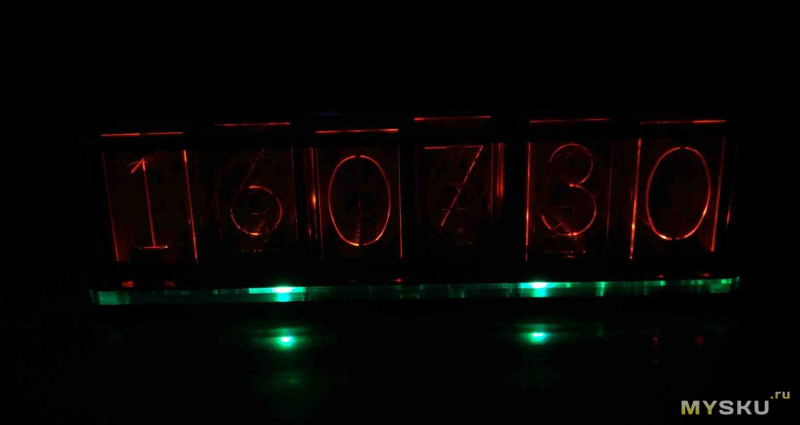 This is the work of the clock in night mode, the lower illumination is turned off and this is good, because in the dark it shines like a spotlight, unlike the symbols themselves. By the way, the transition between day and night is made with a slight delay, if you shine a flashlight on the LED, the clock changes from night to day only after 10 seconds. The delay is especially noticeable at dusk, the watch is already working in night mode, but when the seconds pass, they illuminate the photoresistor and the day mode turns on, then the watch switches to showing the temperature, extinguishes the side indicators and at the time the date is shown, the night mode is already working, then it shows the time again 10 seconds pass and the day is at the clock. So it turns out that they drive in a circle between day and night until the room is dark enough.

In addition to the night mode, the instructions describe the sleep mode. As I understand it, the clock should turn off the display and turn it on only by touching the button or by a sharp sound. I don’t know, maybe it’s just that my house isn’t quiet enough for them, but no matter how I tried, I couldn’t see how this very dream works.

In addition to time, the watch can also show the date and temperature, there is 1 alarm clock, a stopwatch and a countdown clock, but you still need to get to the latter through the menu.
Time can be displayed either in 12 or 24 format.
When displaying the date, the date, month and number of the day of the week are shown, for some reason Monday in this clock is displayed as the 8th day, while Tuesday, as it should be, the 2nd day.
The temperature value is taken from the watch’s microchip, so, as a result, I’m lying about 2 degrees, unfortunately, it’s impossible to correct it.
When working, you can set what the clock will show, two options are available: only time, or time, temperature, date. In the latter case, you can set how often the available options will be switched, 5/10/30/60 seconds or 5/10/15/30/60 minutes.
If you choose what will show the date and temperature, you can set one of 4 effects for changing the time to other values, the only difference is how the change will occur from left to right, right to left, from the center to the edges or randomly.

For seconds, you can choose whether they will switch abruptly or fade out smoothly and light up when changing.
The color of the symbols can also be selected manually, 17 color options are available, or how can I choose one of the gradient options and set the speed of its change.

Assembly video and demonstration of work.

Small conclusion: Assembling this set took me almost 4 evenings, but I liked the result and after minor modifications to the case and alteration to battery power, the watch will go to the shelf and will delight with its work. For those who also decide to get such a watch, I would recommend considering whether you are ready to spend several evenings on assembling them and maybe you should take the option where you only need to assemble the case, it’s really easier.