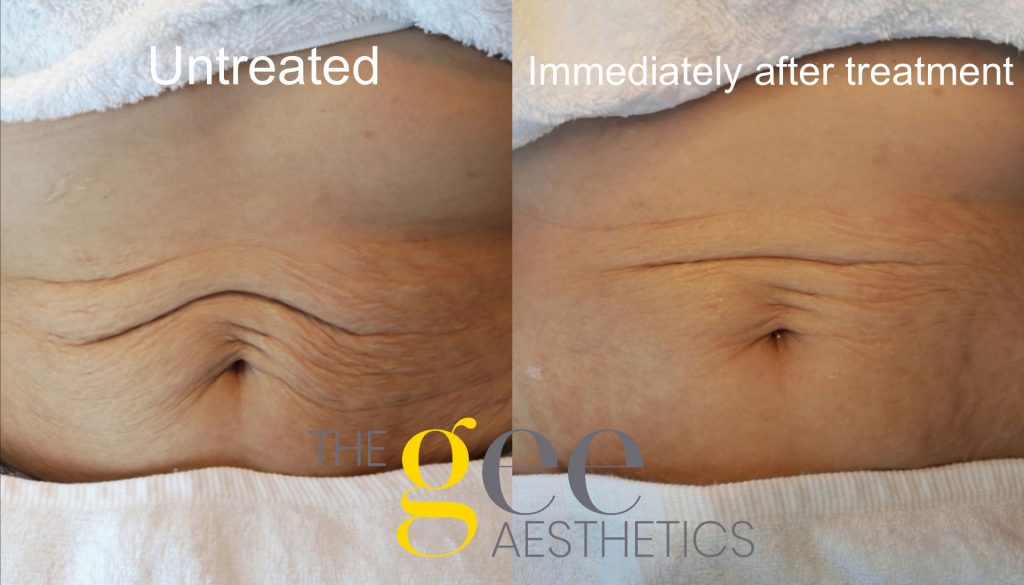 VelaSculpt is a non-invasive cosmetic procedure used to contour your body and reduce the appearance of cellulite. VelaSculpt will enable you to safely achieve your dream body: toned, contoured, and the shape you’ve always wanted. The results you achieve with VelaSculpt cannot be replicated with diet and exercise—it’s best to think of it as the “finishing touches” to the body you’ve always wanted.

When patients pursue VelaSculpt, they may want to improve the appearance of their arms, neck, abdomen, or legs. However, other parts of the body can be improved with VelaSculpt as well. The above listed are just the most common ones. These areas of the body are very sensitive, and there are increased risk with surgical procedures. This is one the biggest benefits of VelaSculpt III: you can treat sensitive parts of the body but with very little risk.

VelaSculpt is cleared by the FDA.

It renews collagen, reduces the appearance of cellulite, and improves skin quality. It’s a great non-invasive, non-surgical solution. Some of the problems that VelaSculpt is used to address are “bat wings” (or fat that hangs down from poorly toned or untoned arms), slack skin on the neck or other places on the body, fat deposits and cellulite deposits on the buttocks, thighs, stomach and hips, and “love handles” or “muffin tops.”

VelaSculpt typically happen in groups of three. Patients will have three procedures of thirty minutes each, two weeks apart. They can be done at lunch in the middle of the work day. There’s very little discomfort, minimal bruising, and generally, few side effects are reported. Zero downtime is one of the major benefits of VelaSculpt.

What areas can be treated with VelaSculpt?

How to know when it’s time for VelaSculpt?

Cellulite is a huge problem for many women, as well as body shape problems that don’t seem to go away with diet and exercise. These problem areas can occur all over the body, including buttocks, thighs, stomach, and upper arms. VelaSculpt helps you contour loose skin, cellulite, bulges, and it also makes the areas smaller.VelaSculpt will help you achieve the body you’ve always dreamed of, without complicated surgeries that are painful and require lots of downtime.

A benefit of VelaSculpt is that it requires very little preparation. It is a safe and comfortable procedure. There is no pain or discomfort during or after a VelaSculpt appointment. Sometimes minor bruising occurs during VelaSculpt, however, it’s rare.

A benefit of VelaSculpt is that you can do it at any time of the day. You can get a VelaSculpt treatment during your lunch hour and head right back to work. VelaSculpt is a very discrete procedure. If you receive a VelaSculpt during the work day, nobody will know, because there will be no signs you got a treatment.

One of the key benefits of VelaSculpt treatment is that your body will look great after just one session.

If you want to start getting VelaSculpt treatments on other areas of your body, more sessions will need to be added.

Who can’t get a VelaSculpt treatment?

VelaSculpt is appropriate for anyone of any age who’s looking to prevent or reduce signs of aging or seek anti-cellulite treatment.

Another common thing that people seek VelaSculpt treatments for is body proportion issues. Colloquially known as “muffin tops” or “love handles,” VelaSculpt can reduce unwanted cellulite or fat in the hips.

VelaSculpt is best for patients are who are healthy and already close to their ideal body shape and size. It is not a miracle weight loss tool, but instead a body contouring treatment.